This year I have been doing lots of composing.

I have recently finished my orchestral piece – Symphony, and a new work for violin and piano.

Both are available to perform. I will post an audio file for them both shortly.

It looks like there might be some activity returning over the summer, watch this space for news!
Also, during Lockdown and together with my lovely wife, we have written a children’s book.

We are hoping to get it published later in the year.

It is called The Bird in the Fireplace.

I thought it was about time I sent you an update!

Over the Autumn, I ran an online Longcommon Chamber Music Course, with a clarinet Masterclass with Maximiliano Martin. We all had a lot of fun, and made a lovely online concert for the end of the course.

I also spent some time with the Bass Club of Great Britain Virtual Junior Course, which was run by Caroline Emery.

I had been asked to write a little piece, and I am delighted to share the results here.

this is a link to the recordings that I put together from the participants recordings.

I hope you enjoy them!

I have also just finished editing a recording of the Symphonic Wind Orchestra from the Royal College of Music Junior Department. I was very lucky to have Jonny Ainscough edit and mix this recording with me. we recorded the 3rd movement of the First Suite in Eflat by Gustav Holst.

Here a few things that I have been up to!

I will be posting more soon!

See below for a video of Pie Jesu that I wrote for the RCMJD Training choir.

It is performed by them, remotely, so this is a virtual choir recording.

with many thanks to John Mitchell, who made the lovely video.

Also, this video is a performance by the Royal College of Music Symphonic Wind Orchestra of a new piece by me called Hymn for Winds.

It was also recording remotely during lockdown, and John Mitchell has again supplied the Video and photography.

Another year flashes by!

This year has been the year of teaching!

The summer was a busy one, with courses at Aberystwyth Music festival, Longcommon Chamber Music, conducting for NCO and a first Clarinet Chamber Music Course in Majorca!

I have just finished my first exciting term as Head of Woodwind at Wellington College.

I have also had two more pupils gain a place in the NYO, and a former pupil, Matthew Glendenning is currently on trial for three orchestras; RNSO, Royal Liverpool Philharmonic and LSO!

My current RCMJD pupil, James Garagnon, will be performing the Mozart Clarinet Concerto with the RCMJD symphony Orchestra on 21st March 2020, as a result of winning the Peter Morrison Concerto Competition.

UNIT had another residency at the Norwich Arts Centre, this time with a Moon landings project, do look it up!

next year is looking exciting too, so do watch this space.

[UNIT] are back performing in Norwich, at the lovely Arts Centre Jan 23rd-25th, do come along if you can, and look at the link on the homepage above for more information.

I am as usual, running many courses at Benslow Music and at City Lit, so do check out their brochures and websites.

I am also very excited to be conducting a National Children’s Orchestra course in Port Regis School during the summer. I will be conducting all sorts, including music by Holst, Grainger and Dukas.

I will also be running a clarinet course on the well known Aberystwyth Musicfest and Summer School, do look out for more information soon.

Below. Anthony conducting the first rehearsal with the Band of the Parachute Regiment in his new work for the Centenary of WW1 in Autumn: Autumn 1917 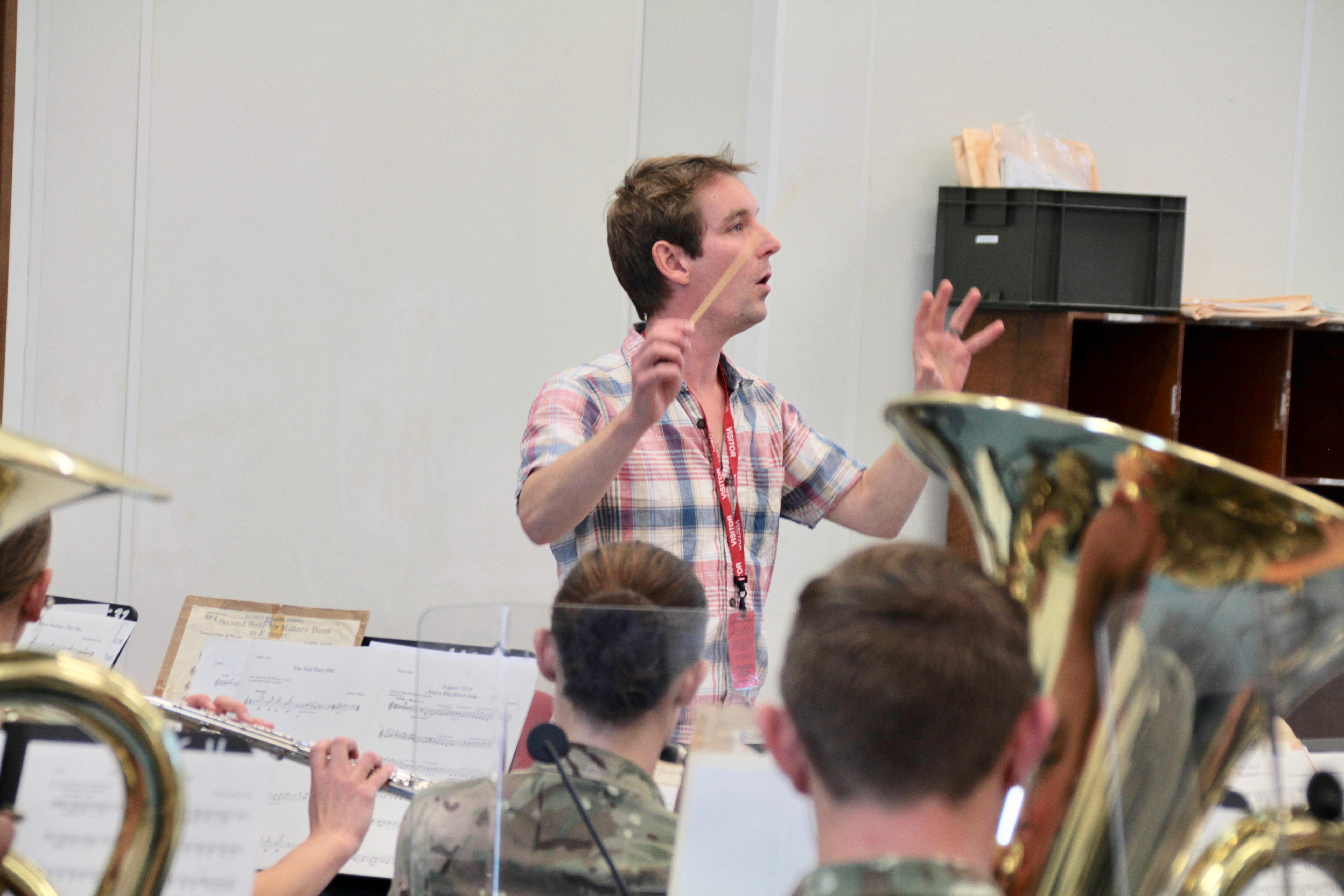 Another Summer flies by, in a whirlwind of courses and concerts!

My Longcommon Wind Course was another fantastic week, with some stunning playing in the concert and a very high standard masterclass with Chris Richards from the LSO.

I coached the clarinet section on National Children’s Orchestra Under 13s, which was, as always a great week, and this time had the added bonus of being held in the beautiful setting of Sedburgh School in Cumbria.

Then on towards Autumn.

In September, The Roman River Music Festival has a world Premiere of my Suite for Wind band, Choir and children’s voices called August 1914, taking poems from the female first world was poet, May Wedderburn Cannan, and setting them to music.

I have also been running a series of Primary school workshops linked the pieces, during which I have set four more or May Wedderburn Cannan’s poems, with music shaped by the pupils themselves.

Looking ahead to the rest of the Autumn, I have the usual courses for Orchestra at City Lit, this time in October -23rd -24th, and again in December -11th-12th.

I have also just joined the Braid Ensemble as clarinettist. the group performs the stunning music of composer David Braid, and we have an exciting few months of events coming up including performances in London on 17th Novemeber and many more that I will add soon, or see the website https://braidensemble.com/

UNIT, my collaboration with sound artist Bill Vine is going strong, and we have several performances lined up including a residency at the Norwich Arts Centre in January 22-25th.

I hope to see you soon.

So, dates for the diary for playing events etc are listed below.

March 5th,Watershed Studio – another of my one day choral courses, with a great cooked lunch included. more details on http://www.watershedstudio.co.uk

Hello, after another busy Summer, including our annual wind music course at Longcommon, Autumn is here and I am looking forward to events coming up:

Benslow Music Quintessential clarinets -Nov 27th – 30th – this time with the wonderful Daniel King Smith on Piano – do sign up if you can as spaces are limited.

I have just been offered the post of clarinet teacher at Channing School in Highgate , London, which I am looking forward to starting in late October.

I am very much looking forward to hearing SCAW play my new work for Bass clarinet and Piano in Sheffield in October, if you can make it along to what will be the official world premiere it would be great to hear from you.

So, dates for the diary for playing events etc are listed below.

March 13th,Watershed Studio – first of my one day clarinet courses, a mixture of solo tuition, and small ensemble work, with a great cooked lunch included. more details on http://www.watershedstudio.co.uk

two other dates at Watershed 10th July 2017, another clarinet workshop

I have been commissioned by Andrew Hunt for the second time. This time to write a work for wind quintet and bass clarinet, which will receive it’s premiere on 6th May in London.

So, Dedham Vale is now available from this website.

It is ready to download as a PDF file. Please play it and spread the word.

Also, I have just finished a book of 6 setting of traditional Christmas Carols entitiled

they are also available as a PDF- follow the link below.

They are scored for a mixture of Soprano Alto Men or just S A. and piano or organ.

please do use them!

I hope to see you at an event soon.